“Watch what you watch, see no evil, do no evil, watch what you read garbage in, garbage out, watch the  friend you keep – show me your friend and I will tell you who you are, watch places you go to and weigh the consequence of your act before it (decision making) because sex is worth waiting for and sex is done or should be done at the right time, right place’’.

Those were the concluding words of the project manager of ODSACA, Dr Dayo Adegbulu who gave the keynote address  at a special valentines event organized  for adolescents in Akure metropolis by the collaborative efforts of Don Bosco VCT Center and Girls to Women Research and Development Center, Akure  . The SACA boss explained the link between social vices that are common among young people such as rape, drug abuse etc and the personal ineptitude of students who  become victims by making wrong choices of friends and places to be.   He encouraged the participants to make themselves the source of change because they are special.

Cross section of participants at the event

Following opening prayer by Father  Italo Spagnolo, the special event began with opening remarks by programme manager of Girls to women research and Development Center, Mrs Olamide  Falana   who welcomed the participants and encouraged them to pay rapt attention to the sessions and activities the event entails. She noted that most adolescent reproductive health problems arise form the need of young people for acceptance and love which they often seek in wrong places, in wrong activities  and in wrong people, this plunges majority of these young ones into regrets and pain later in life. The 2014 valentines  event  is organized to teach the essence of true love as well as pass the knowledge for decision making making especially  in areas of adolescent relationship building and and skills required for delaying sex.

Moral decadence was the first session for the day which was taken by Sir Richard Ajayi (SKM) who gave an overview of the moral problems facing the youth today. He explained the negative effects of uptake of vices on young people which often derails their path to success. The lives of great men and women of this age were also used as examples as he noted that these men and women would not have risen to such enviable heights if they had succumbed to vices  in their younger days.

The second session  on Myths and Misconceptions about Valentines day which sought to impart essential life skills in the students  was taken by the Executive Director of Kids and Teens Resource Center, Martin-Mary Falana. The youth advocate used simulations to explain the problems young people face such as negative peer pressure, exposure to drugs and harmful substances, multiple sexual partnering, transactional sex etc. He then used various methodologies to explain the skills that can be used to resist such negative influences. 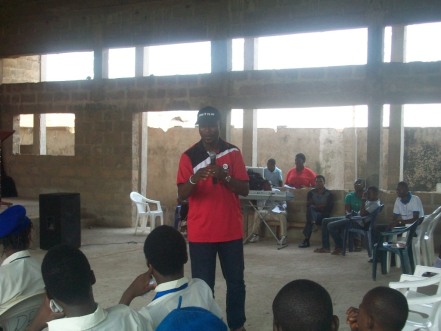 The resource person, Martin-Mary Falana during the skills building session

There was drama interlude on the theme of the day  to energize participants in between  session s by the  students of FUTA staff secondary school  and students of Don Bosco technical institute.

Students of FUTA Staff secondary school during the drama presentation

The Quiz competition in progress

Presentation of gifts to Participating schools

Vote of thanks was said by Toyin Owajoba  who thanked the participating schools were for their support towards the event while the participants were appreciated for  their rapt attention and cooperation  at the event which ended  by  2.50pm.

Group photograph by staff and volunteers of Don Bosco VCT Center and Girls to Women  RDC at the end of the event.

I recently watched a gut wrenching video that was the sexual acts of a 12 year old girl and her partner, a boy of 6 years. My indignation was not at the girl who in her thwarted innocence acted like a sex worker on fire of passion but at the terribly irresponsible adults who must have abused the girl sexually, turning her to a sex tool at such a tender age.

The beauty of childhood is not just being young but being innocent and pure, being free from the entrapment that only shorten life.  Such is the unfortunate lot of children abused incessantly by irresponsible wards and strangers like. The rise in such cases of sexual assault and transactional sex with minors calls for tougher punitive actions to stem the tide.

This is a call to all stakeholders to speak out against child molestation and assault. The time is now, more than ever.

BROKEN HOMES AND CHILD ABUSE:WHOSE CHILD IS IT ANYWAY?

I was in a discussion with a friend who is  counselor in a government owned secondary school recently and had to patiently listen as she lamented  her experience with the students. According to her, a growing percentage of children in the school are sponsored by single parents as a result of broken marriages which is a cause of concern for her in particular as she spends so much time counseling and settling disputes, time that would have been better spent in putting together  life touching events for the larger student population. This made me spend some time in research and inquiry into the incidences and causes of broken marriages and its effect on youth.

Traditionally, broken marriages was almost alien to our culture, what was common  then were incidences of single mothers who out of waywardness as youth were impregnated and had to live with the social stigma that was attached to this. In fact, mothers would fight tooth and nail to prevent their sons from falling into the trap of such ladies who were then refered to as after –one while the belief was that children born to single homes cannot function well in future  marriages hence will later have their homes broken up and produce children who will tow the same line in future. This goes on to explain the value our society places on the traditional structure of the family where the father provides most of the financial needs of the home as well as a structure of discipline and the mother supports the home financially and provides moral guidance to the children.

Truth be told, there are a myriad of reasons for division in homes  and the reasons range from marriage for wrong reasons such as money and  great youthful looks, pride on the part of the husband or the wife, wife battery, infidelity on the part of the husband and the wife,  bad friends, rushing into marriage without understanding the partner, pregnancy out of wedlock to mention a few.  However like the African saying, when two elephants fight, the grass suffers most hence when parents struggle and fight, the child or children in that union suffer the effect .

There are numerous known effects of broken homes on the children but of importance this week is its effect  on education of the children and exposure of such kids to child abuse. A study investigated the relationship between broken homes and child abuse among public secondary school students in south-west Nigeria.  A total of 1,440 public secondary school students in 36 schools from 9 Local Government areas in 3 south-western states of Nigeria were sampled for this study. Out of these students, 695 students were found to have suffered various degrees of abuse from parents, caregivers and close relatives.

In Nigeria, there has been public outcry including media campaign against the prevalent exposure of children to this avoidable social misfortune called child abuse. One observes children engaging in petty-trading and hawking for their parents/guardians when they should be in school laying solid foundation for their future. There are also cases of child prostitution in order to get money. The average school teacher today has on his hands a crisis resulting from parents abdication of their responsibilities and many teachers believe this has  adversely affected the character and output of students. There are cases of dirty and tattered uniformed students stealing or begging for food, students not coming to school regularly and students sleeping during lessons almost all the time. Some of them are affected with anxiety, depression and passive or withdrawal behaviour. Some of the students engage in aggressive, disruptive, inappropriate acts or delinquent behavior. Some seek inappropriate affection from other students. All these types of negative behavior usually affect students academic performance.

A child in a broken home would not receive as much emotional, psychological and financial support as a child in a settled home and such  neglected children often are more seriously disturbed than abused children. The neglected child is treated more as if he were not there or as if his parents wished he were not there and this insidious and fundamental rejection can inflict deep psychological wounds on the child when each parents begin to push responsibilities saying:  its your child, pay the bills.

Single parenthood cannot be waved aside in our society at the moment but those concerned need to look beyond the present anger at the other and think of what is in the best interest of the child. The parents of such kids in conflict  situation need to take a careful thought at the effect of their actions which is usually aimed at inflicting pain and showing supremacy to the other to the psychological effect of their actions on these kids. The child’sn moral needs should not be left to school counselors alone but should be taken care of by the parent as much as possible. Quality time should also be spent with the kids to assure them of love and give them sense of belonging and security.

At present in Ondo state, there are family courts set up to assist families settle disputes in a way that will not traumatize the child while there are also child courts and child support services in the ministry of women affairs and social development all aimed at preventing the rising population of child delinquents in our society. However if such parents do not cooperate, and assist the government by playing their part without blames and responsibilities, these systems put in place will yield greater effect.

On the part of school counselors, such children need to be well monitored and counseled regularly  to support their development, and assist them in seeing the positive side of life and future family settings to enable them avoid seeking love in wrong places which has led to pregnancy and loss of education of many. If single parents can think of the best interest of the child before taking actions, our will be a better world to live in.

Wish I Were Here

**Warning: Heavy subject matter. I overcame my hesitation about posting this, because, in the 23 years since this incident, the situation for women has only gotten worse. I’ve decided to add my small voice to the crowd, because there’s always more strength in numbers.**

The bartender from work drives her car down the two lane highway that snakes alongside the beige, desiccated cliffs of northern Baja California. The woman who used to be me huddles in a blanket on the passenger side and stares out the window. Everything seems alien – the car, the man, herself, the landscape. It’s as if she’s viewing reality from behind fingerprint-smudged glass. The sea appears immobile – waves frozen into ripples. Sun rays pierce the clouds, illuminating two small islands.

“They’re uninhabited.” His voice penetrates the fog in her mind. “The Mexican government uses…

OJ (Middle) and past camp participants in Ijo mimo camp

This is a call for volunteers to join hands with us for the 2013 edition of students holiday camp.
Its another time again to build the youth and uplift our Nation.